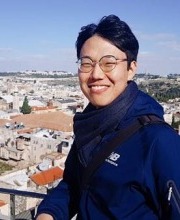 I usually go by Tim, but my Korean name is Pyung Hwa, which means  "peace". I have always been interested in peace, war, and conflict in the world. Specifically, I'm interested in the Middle East’s security, East Asia’s security, and international relations between these regions. That's the primary reason I decided to come to Jerusalem and major in International Relations and Islamic and Middle Eastern studies at the Hebrew University of Jerusalem for BA. Currently, I'm an MA student in the department of Islamic and Middle Eastern studies, and I'm working on my thesis, which focuses on North Korea's involvement in the Arab-Israeli conflict. Being part of the Asian Sphere Program is such a unique and humbling opportunity. Thanks to the personal, academic, and financial support of the program, I will be able to do exactly what I wanted in my research, namely studying inter-regional relations of Asia, including conflict and cooperation among various actors in the sphere. I'm sure that the Asian Sphere program will help broaden and sharpen my understanding of Asia and the world at large.